An Evening at the Market 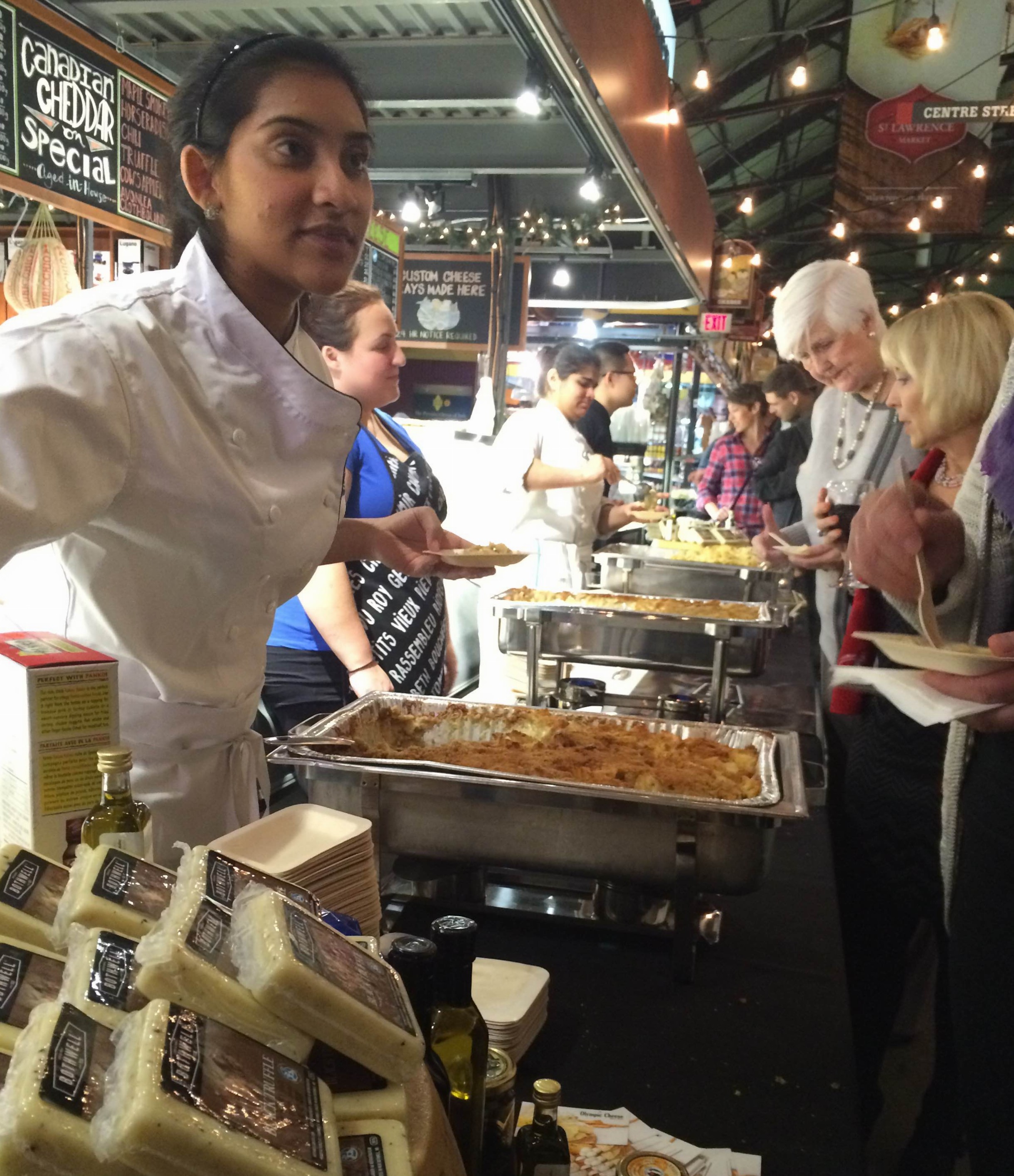 The St. Lawrence Market is a staple of downtown Toronto life, a destination for those in search of unique ingredients for a special meal.

On November 12 for the first time in years they brought back a culinary experience called “Evening at the Market”. For $75 attendees sampled a wide variety of food from the various vendors and enjoyed endless wine from Union Wines and beer from Amsterdam Brewery.

In the spirit of eating good, they also made sure the event did good with all proceeds going to a noble charity called Food Share, a not-for-profit organization working with communities and schools to deliver healthy food and food education.

The overall vibe of the event was lively and casual, not at all pretentious like one might expect from a culinary event. Energetic music filled every corner of the market. Circus characters walked among the crowd. Some towered overhead on stilts. Some dangled from the ceiling, twisting and turning in aerial silks. And some in shimmering white suits danced up and down the walkways throwing rhythmic balls.

Meanwhile the vendors were busy prepping food, beaming with pride and joy as they served lines of familiar and new faces. Behind some counters you could even see the next generation of food artisans working alongside their parents.

The ground floor was more of a party vibe with a DJ spinning Euro Dance music that got many of the vendors dancing and clapping their hands in between dishing out their wares. This area was where you could find most of the meats and cheeses, along with some baked goods.

On the lower level there was a variety of ethnic foods, jams, and decadent deserts. There was a live jazz band, a group of young men called The Yonge Kings who performed a memorable rendition of “You Are My Sunshine”.

There were also cooking demos with Chef Lora Kirk, who gave great tips such as serving kids roasted garlic instead of raw, since its sweeter and they’re unlikely to notice.

The food was just as fun and nostalgic as the playful, vibrant sights and sound that were part of the market that evening. With about 100 vendors to discover, it would certainly have taken at least a few visits to try them all!

The cheese and deli area featured a rich mushroom risotto from Schefflers. Over at Olympia Cheese  they were serving a grown-up version of a childhood favourite, macaroni cheese made with Bothwell Black Truffle and white truffle oil, subtly rich & flavourful. Serving these creations were chefs from George Brown’s culinary program.

The most popular seafood stall was Mikes Fish Market, where there was a constant line up of people waiting for oysters. You knew when you were close by because you’d suddenly be surrounded by rosy-cheeked people shucking back oysters, with empty shells decorating their plates.

There are many meat vendors at St. Lawrence Market, but Whitehouse Meats stands out with their selection of products from around the world. They feature exotic meats most people would never imagine eating, such as ostrich and camel. Their kangaroo sliders were juicy and flavorful, and perfectly paired with Kozlik’s Dijon mustard.

A fine Canadian mustard, Kozliks, showed off their talents with a mustard bread. Buttery, light, with a tang of mustard, like a cheese croissant with a mustard profile. Before rolling the dough into a crescent shape and baking, they add mustard seeds. When they’re done they add a dab of Dijon mustard for just the right amount of kick. They’re only served on Saturday, truly making them a treat.

Under a colourful looking stall that looked like a circus tent, Carousel Bakery , home of the “World Famous Peameal Bacon Sandwich”, were giving out small decadent samples. A simple slice of bacon on a white roll, flavourful and tender, and just the right thickness.

There was no shortage of food or drink that evening, or smiling faces. The only complaint anyone had was that the night had to come to an end. Fortunately the St. Lawrence Market with its friendly faces and fantastic food is open all year. Check out their events calendar for a host of